The Real Story: Horses, Bright Lights, and My Pursuit of Excellence

Carouser, competitor, taskmaster, dreamer, teacher, and visionary, George Morris has been ever-present on the rarified stage of the international riding elite for most of the seventy years he's been in the saddle. He has represented our country as an athlete and a coach and, at one time or another, instructed many of our nation's best horsemen and women. His carefully chosen, perfectly enunciated words are notoriously powerful. They can raise you up or cut you to the quick. His approval can be a rainmaker; his derision can end a career.

But as much as people know and respect (or perhaps, fear) the public face of George Morris, he has lived, in other ways, a remarkably private life, keeping his own personal struggles – with insecurity, ambition, and love – behind closed doors. It is only now that he has chosen, in his own words, to share the totality of his life – the very public and the incredibly private – with the world.

The result for many is a surprisingly frank, honest, personal retrospective from a man presumed to be strict, guarded, and even scary. But while deviating from his reputation as a stickler for formality in some respects, George Morris remains true to his loyalty to his sport and his country, providing an unparalleled chronology of the rise of American equestrianism and its major players – both human and equine.

Within these pages readers will find a vivid and often touching portrayal of a man's journey from nervous youth to indelible leader, enmeshed in a fascinating description of high society, international travel, gay life, and elite sport through the past six decades.

This engrossing autobiography, the real story of the godlike George Morris, beautifully demonstrates his ultimate humanity.

One of the few remaining, working teachers with true, in-depth knowledge of the great figures of the past…as well as the rising stars of the equestrian world’s future.

Enlightening and inspiring. An insight into [Morris’s] human failings – his struggles and doubts and worries – made for a much more complete picture of him than has ever been painted. An unprecedented look into the life of a legend.

The Chronicle of the Horse

Unrelenting lets you in on the beauty behind the beast. 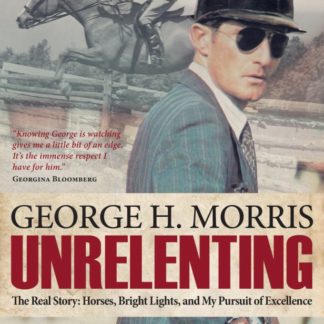 You're viewing: Unrelenting £29.95
Add to basket
0
0
Your Basket
Your cart is emptyReturn to Shop
Continue Shopping