A Complete Revision of the Shot Placement for African Big Game

Kevin "Doctari" Robertson's best-selling book on shot placement for African game, The Perfect Shot, has now been completely revised and updated: extensive additions to the text; 300 all-new photos of the animals covered; and revised, detailed anatomical drawings. The Perfect Shot II also has shot-placement details for a number of species not covered in the original edition, including blesbok, bongo, black wildebeest, grysbok, nyala, reedbuck, roan, and steenbok. In all, twenty-seven African game species are now covered. Robertson, a licensed professional hunter and veterinarian, first developed The Perfect Shot a dozen years ago, and it was quickly recognized as the most comprehensive work ever undertaken to show the anatomical features for all classes of African game. His revised version reflects his increased knowledge of big-game anatomy and shot placement. In addition, the chapters on bullet construction and performance have been substantially revised to cover the advances in bullet development that have occurred in the twelve years since the publication of the original edition. The book covers just about every animal you might hunt in Africa, from the big, dangerous species (elephant, buffalo, rhino, and hippo) to the large cats (lion and leopard) and from the largest antelopes (eland and bongo) to the smallest (duiker, grysbok, and klipspringer). Even Africa's more unusual species (giraffe, crocodile, zebra, and hyena) are covered in detail. Each animal is shown in at least one color field picture as well as a color ";ghost view"; that illustrates the shoulder bones, heart, lungs, brain, and spinal column. These views allow you to see precisely where to place your shot in relation to how the animal may be standing. Most species now have multiple illustrations from different angles for easier understanding of the different shot-placement options.

Reviews for The Perfect Shot II

This book is a must have for any sportsman who hasn’t already got a copy and is contemplating an African hunting safari. The mini edition is perfect for taking with you and easily fits in the pocket, whereas the large, bound hardback can be studied at home in greater detail. 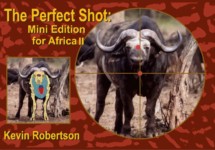 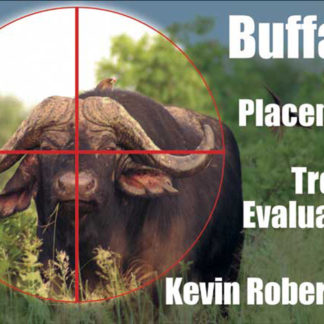 You're viewing: The Perfect Shot II £16.95
Add to basket
0
0
Your Basket
Your cart is emptyReturn to Shop
Continue Shopping