One day in 1983, Annemor Sundbø of Kristiansand, Norway, became the owner of a ‘shoddy mill’, a facility designed to process rags, scraps, and other discarded fabric into reusable material. However, Sundbø wasn't interested in running the mill; she was drawn instead to the store of thousands of mittens, gloves and other knitted castaways, bundled into a warehouse on the mill's grounds, awaiting their turn. These well-used discards were in fact a treasure trove of traditional Norwegian patterning and technique, and the beginning of her life-long effort to document, preserve, and reconstruct classic Norwegian designs — dozens of which are assembled here in a timeless collection, now available for the first time in paperback.

Among the traditional Norwegian motifs featured are animals, figures, flowers, hearts, palm and thumb patterns, and border designs, for mittens and gloves. The historical and cultural context of each motif accompanying every pattern are explored. Also included are resources and instructions for understanding pattern repeats and successfully transferring motifs to hats, sweaters and many other items.

Annemor Sundbø is a textile designer and teacher of weaving. She owns and operates a knitting workshop called Ose Ullvare in Setesdal, Norway, lectures internationally, and teaches spinning, folk-art embroidery, and knitting design. She has been honoured for her contributions to Norwegian culture with multiple national prizes and awards. 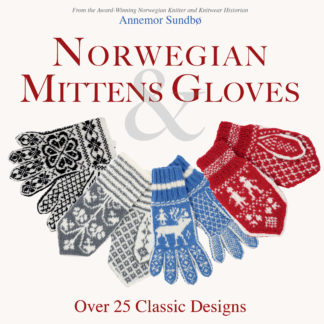 You're viewing: Norwegian Mittens & Gloves £18.95
Add to basket
0
0
Your Basket
Your cart is emptyReturn to Shop
Continue Shopping