Reflections on a Life in Cricket

Beyond The Pavilion spans seventy years of social, regional and cultural history through the eyes of one of cricket’s earliest Test match wayfarers, Barry Knight. As a ten-year-old, Barry saw Don Bradman’s 1948 ‘Invincibles’ at Lord’s. His early days were spent playing street cricket in London’s East End, captaining his school against Eton College, and later captaining England Schoolboys. At the age of fifteen, he was recruited to play for Essex and went on to become one of England’s finest all-round cricketers.

In this memoir, Barry reflects on his international playing career and his experiences touring India, Pakistan, Australia and New Zealand in the 1960s. He recounts tours with Fred Trueman, Geoff Boycott, Ted Dexter, and Colin Cowdrey and playing against the era’s best Australian, Indian, Pakistani, and West Indian players. He also shares stories about life in London in the Swinging Sixties and his place in the D’Oliveira affair, and the anti-apartheid protests.

After his retirement, Barry moved to Australia in the 1970s and became Australia’s first professional cricket coach mentoring and developing three Test match captains: Allan Border, Mark Taylor and Steve Waugh. He also had a front-row seat in the development of World Series Cricket.

After being spotted as a promising teenage cricketer, Barry Knight joined Essex and developed into one of England’s finest all-rounders. He played twenty-nine Test matches for England and 379 First-Class matches for Essex and Leicestershire. During his domestic career with Essex, Barry completed the double (100 wickets and a thousand runs) in four seasons. He accomplished the elusive double in each season from 1962 to 1965, including the fastest in modern times (ten weeks). In 1964 he won the World Single Wicket title at Lord’s, beating his good friend, Sir Garfield Sobers. Upon his retirement from playing in 1969, he moved to Australia and established a cricket-coaching business in Sydney.

Andrew Leeming was born in Manchester, England, and spent the first fifteen years of his life between Australia and England. He graduated from the University of Technology, Sydney, in 1981, and the University of NSW in 1984.

He began a lifelong friendship with Barry Knight when he attended his coaching school in Sydney in 1977. In 2007 he oversaw and curated the restoration of Sir Donald Bradman’s childhood home. Andrew is currently Chief Executive Officer of the Bradman Foundation and Museum. ‘Beyond The Pavilion’ is his second book.

Reviews for Beyond The Pavilion

Had I not first opened the book at nine o’clock in the evening on a weekday, I would probably have read it through in one sitting, something which is the acid test of a five star book. 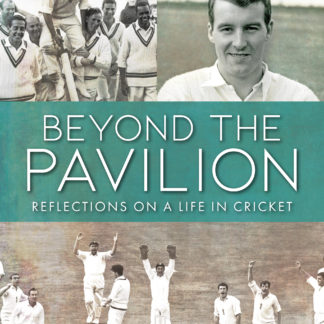 You're viewing: Beyond The Pavilion £18.99
Add to basket
0
0
Your Basket
Your cart is emptyReturn to Shop
Continue Shopping